A few weeks ago, I had a traumatic incident. Try not to laugh while I explain (Or, go right ahead. I’ll never know).
Driving home from work one day, I saw a squirrel who had been hit by a car. Only his back legs had been injured and he was scooting across the rest of the road, pulling himself with his little arms, and occasionally falling over to writhe in pain. He finally made it to the sidewalk and collapsed. My heart broke as I knew there was nothing I could do to help him. It almost would have been less cruel to run him over and put him out of his misery (but I just couldn’t). I realize I’ve added a gender to the squirrel, who I didn’t know personally, and is in fact, a squirrel. Just be glad I didn’t name him.
And I just couldn’t get him out of my mind. Right there in the car, I decided that if I felt that bad about a squirrel, maybe I shouldn’t be eating meat. I certainly would never eat meat if I had to see the animal die. But that’s what happens, whether I see it or not. So I stopped eating meat, in honor of that little squirrel.
That was three weeks ago and I still haven’t eaten meat.  I’ll technically never be a full vegetarian because I won’t give up fish and seafood (called a pescetarian). My family is from Maryland and Maine and most holidays involve either blue crab or lobster. I am also not a big meat eater to begin with. I very rarely eat red meat and only occasionally eat chicken. I’ve also never eaten lamb, veal, or duck (all way too cute to eat). I’d say I average about one to two servings of meat per week so it’s not like it will be a huge change to my diet. 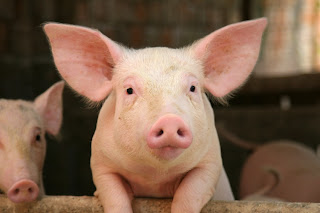 What this pig is saying in my head: “I’m as smart as a 3 year-old child and I’m way too cute to be bacon. Plus, BLTs aren’t that good, right? Right??!“
I’m not ready to put a label on it yet; I’ve just been saying that I’m not eating meat right now. But maybe right now is going to turn into forever. I’m just not sure yet.
I’ll let you know!
Do you have any amazing vegetarian recipes?

What about a fantastic fish recipe?