Did I ever tell you about the time I got stuck in an elevator?
In Paris. Drunk. On their biggest National holiday.
Cause yeah, that happened.
Let’s dive in, shall we? Cause this story is a doozy.

Once upon a time, I studied abroad in Paris.
I know, I’m a lucky girl. My parents sent me abroad to learn French.
And become cultured. Maybe even mature a bit.
What followed was quite the opposite.

If you know anything about France, Bastille day is basically their 4th of July.
The whole freakin place shuts down and everyone gets drunk and dances in the streets.
I say, if you can’t beat them, join em so I was out there celebrating like I was French.
Only sloppier. A dead giveaway that I am an American.

Side note: I was once told that I “walk like an American.”
How is that even possible? It isn’t. Walking is walking.

After a smidge too much beer, wine, vodka, of everything, we decided to go change into our “clubbing outfits.” You can’t make this shit up. Clubbing. The word just makes me giggle. I sound like a Jersey Shore cast member.

But really, in Europe it seems they love to create these crazy, multi-level underground clubs. It’s madness but it makes the whole thing feel grungy and dangerous and fun. I realize those 3 things don’t go together but they kind of do. Only in Europe though.

When I studied abroad I had my own 7th floor studio apartment. Trust me when I say that when I arrived from California I had no idea I would be so lucky. I thought I’d have to share a room or something. Never did I imagine that we all got our own apartments (though they were tiny). Here’s my view, Eiffel Tower and all… 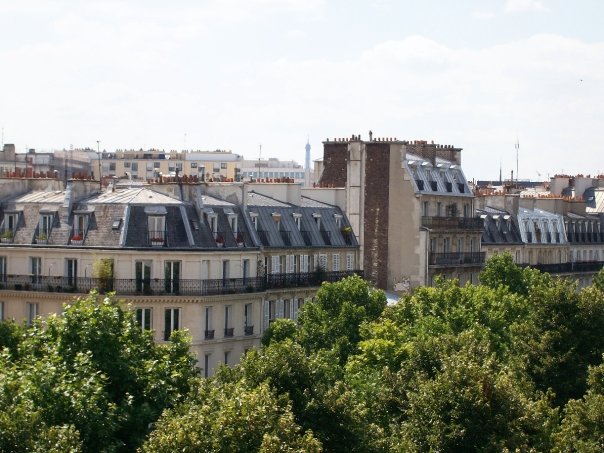 Livin’ the dream, right? Dang I’m jealous of past me.

So back to Bastille day…We hop in our elevator in our several hundred year old building. No biggie, we’ve taken it 200 times already. One friend gets off on 6 and two of us head to floor 7.

Cultural note: Floor 7 in France is actually the 8th floor,
since their first floor is called 0.

Exactly half way between the two floors, the elevator stops.
The up arrow is flashing like we’re still moving.
Only we aren’t moving.

So naturally, I take matters into my own hands and, incredible hulk style, pull the doors open.
We are smack dab between floors. The only thing we can see is the inside of the elevator shaft.
For a minute we look at each other, laugh, and wait for it to restart.
When it doesn’t, I do what I do best. Freak out.
Here’s me, having a full blown panic attack. 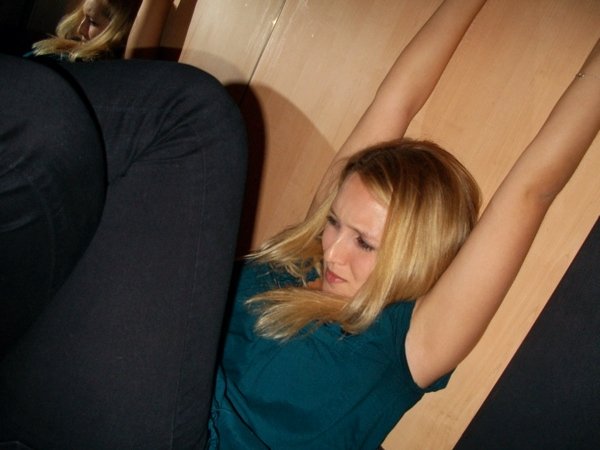 Now, we don’t have cell phones because we’re studying abroad. I left mine in California and never looked back. And of course, the worlds oldest elevator doesn’t have a proper buzzer or phone in it. The emergency button did nothing.

So we resorted to yelling. And maybe crying (mostly me).

I  become convinced that we both need to hang on. We are going to plummet to our deaths.
Finally our 6th floor friend comings looking for us. She’s all decked out and ready to go.
And she hears our pathetic, primal screams and goes to get the RA, a 70 year-old British lady.

I’m convinced everyone in the country is drunk and we won’t get out til morning. Said British lady uses her soothing, maternal accent to calm us down. And wouldn’t ya know it? They found an elevator fixer guy at 11:30pm, and 45 minutes later, he manually cranks the dang thing up and we climb on out.

Longest hour of my life.

Our RA felt so bad, she offered us pastries. Who randomly has beautiful french pastries at 11:30 at night? We accept her offer, scarf down some croissants and head back to our rooms. Clubbing outfits. Beverages. And then of course the nightclubs. Couldn’t let a little panic attack ruin a perfectly good chance to dance the night away, now could we? Oh Paris, how I miss thee.

I took the stairs for at least a week. But only a week.
Cause 8 flights of stairs is just 7 too many.