Let’s just put this out there: I don’t know how I survived before I got Netflix. If you are a TV and movie lover, it is one of the best bargains you can find. My subscription would probably still be worth the cost even if it was $7.99 a week instead of $7.99 a month. Does that mean I watch too much TV? Yes.
I love getting hooked on a TV show with several seasons under its belt. That way you can watch lots of episodes in a row and really decide if you’re going to stick it out. I’m not really sure why more networks aren’t begging to get their current shows previous seasons on to Netflix. Realistically, it gives viewers time to “catch up” and get current on the show, thereby tuning in to the regular programing once they have. This is just a theory (a damn good one). Clearly they expect us to buy the DVDs (not gonna happen).
Recently, I’ve gotten completely hooked on the show Bones. I started season one about two weeks ago and I’m halfway through season two and I can’t stop.
This is a self-destructive habit, without a doubt. Why, you ask? Because I’m the biggest wuss you’ll ever meet. I learned at a young age that I couldn’t handle horror movies, any thrillers with a serial killer, or CSI type shows. A coworker of mine was always talking about how great Bones was so I watched one episode. And now I’ve watched 27 (at $7.99 a month that puts each episode at about 29 cents each. Score!).
Since I’ve started this, I’ve had trouble sleeping. I had a dream last night that I was being chased. Overall, I should stop. But I’m not going to. New plan: Only watch episodes after dark if the bf is staying over. Otherwise, I need to make myself turn it off a few hours before I go to sleep.
But more importantly, when are Bones and Booth going to get together? Gah! I know it happens cause I’ve seen recent ads for current episodes on TV. Looks like I’m on board until at least season seven. 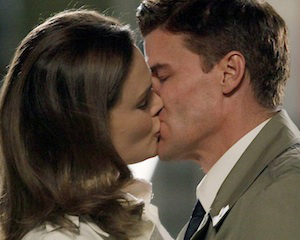 On the comedy front, I’m still on a Modern Family kick.
Have any shows hooked you recently?
Do you have Netflix and if so, do you use at as much as I do?