It’s truth time.
As you may recall, I became a vegetarian on a whim.
I saw a squirrel get hit by a car, then, half alive,
pull himself to the sidewalk with just his arms – to die.
It was horrific and yet people still make fun of me because the reality is,
we don’t eat squirrel meat.

But it really brought to my attention that animals pain is real pain.
They suffer.
And I didn’t want that to be a part of my daily life.
Originally I thought it would just be for a little while,
in honor of that tragic squirrel.
But then I just never started again.

Unfortunately, I’ve proven to totally suck at being a vegetarian.
On no less than 5 occasions I have accidentally eaten meat.

Scene: Family Barbecue
Me: Does this baked ziti have meat in it?
Resounding answer: No
Two bites in, oh yes, it most definitely does. 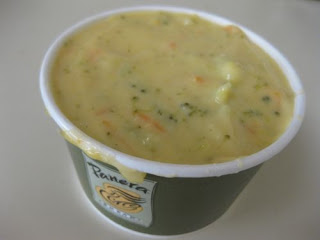 Also, NEWS FLASH.
Panera Broccoli Cheddar Soup is not vegetarian.
Who knew?
I didn’t. The two times I’ve eaten it since giving up meat.


And lastly, to my favorite pizza joint:

Half pepperoni, half mushroom pizza does not mean that for the two slices that touch that there should be BOTH toppings. No no. Half means half.
I’ve definitely consumed at least a couple bits of pepperoni unintentionally.

I figure, my heart is in the right place though.
So I don’t beat myself up about it.
But I know a REAL vegetarian would not let things like this happen?
Or do they and they just don’t admit it?