I’m not super outgoing in the blog world.
If a blog has too many followers, I get intimidated and won’t comment.
I rarely reach out to other bloggers directly.
So when Meighan and I started going back and forth via email and back and forth turned into a real bloggy friendship, I was more than a little excited.
She’s one of my very favorite girls so I’m very happy to be interviewing her today.
Let’s get started…

1. What do you love about living in Alabama? What don’t you love?
This is a hard question! I have honestly never thought of reasons why I love Alabama. It’s just always been home.

I hate a lot more things about AL than I love, that’s for sure. There is nothing to do. Bars get old and downtown Birmingham is sort of… sketchy. The weather is awful. Right now, it is 30-something degrees outside. It’s almost April! [note: this girl is so on her game she sent this to me as soon as I asked for it back at the end of March. Sign you should sponsor her? YES] In June it will be like, 100. Total nonsense.

I hate that some people perceive Southerners in a certain way- we are stupid, we don’t wear shoes, we don’t have paved roads, we live in plantations, we don’t have teeth… You’d be shocked at how many times I hear people from different parts of the country say those things. Craziness!

that is a real sign.  I know exactly where it is on the interstate.  I pass it all the time.  seriously.
2. What is one of your pet peeves about blogging?
Sponsors not really doing anything for the person who paid to advertise with them. If you said you were going to do something, please do it. Also, when blogger gives me error codes it drives me NUTS. And writer’s block isn’t so fantastic either.
3. I’m really excited for you to get engaged. Wait, that wasn’t a question. You’re getting engaged soon. We know it. You know it. Do you have any idea what Ben’s up to? What style of ring are you hoping for?
Oh my gosh! Thank you! Haha, no, I have noooo idea what he’s up to! He told me (and I quote): “very soon.” And that was about a month ago. I’m thinking by the end of summer… maybe. I don’t give him enough credit when it comes to getting something by me, so I know I will be surprised. And as far as the ring goes… I have a picture. [shock the world] Ready?

oh I die just looking at it. When I tried it on, I felt my whole life with Ben come together and saw our past, present and future. Ok, ok, I know that’s the most cliche thing anyone could say, but I swear it’s true. That’s how you know it’s so much more than just a ring.
4. What would you say your proudest moment was in life so far?
Definitely moving out of my parents house and standing on my own two feet. I know this is sort of a strange answer, because everyone has to do that at some point, but it was so hard for me. I am so close to my parents! Leaving home was the best and most devastating thing I’ve ever done. Plus, I’m terrible with money, so paying bills and making it on my own is an incredible success on my part.

5. I know you love reality TV (but you’ve got to give Downton Abbey another shot). Which reality TV star on which show do you relate to the most? Who is your favorite reality TV star and why?
I compare myself most to Kyle Richards. She makes me laugh and she says the funniest things in the same manner that I speak sometimes, and when I’m watching her on RHOBH I think, omg that sounds like me. Also, she’s incredibly passionate about her life and her family, so I definitely relate to her in that way. My favorite reality star is definitely Khloe Kardashian. People hate her for some reason, but I love her. She keeps it real and tells it like it is, which I love.

6. If they made a movie about your life, who would you want to play you? Who would be your supporting cast?
You are hitting me with the best yet hardest questions! Hmm… let me think for a minute about this one. I would have to say Melissa McCarthy to play me. A bigger girl who isn’t afraid to get out there and do her thing? That just screams Meighan. Ben would definitely be played by Kevin James- they are so alike! And by alike, I mean crazy. I’d also have Reese Witherspoon, John Krasinski, Chelsea Handler, Victoria Beckham, & Neil Patrick Harris to play various friends. It would be a comedy, for sure.

7. And, to steal a question you’ve used that I always love reading the answer to: If you wrote a book about your life, what would it be called and why?
“Nonsense & Other Crazy Stories.” I try not to take myself too seriously and I always try to turn any situation into something comical. Not because I just think I’m hilarious, but because I like the lighter side of life. Plus, let’s be honest, how could it not have the word ‘nonsense’ in it?
my future book cover. 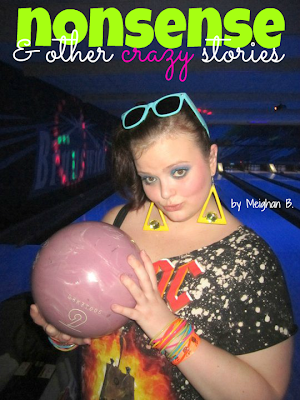 See? So if I had to play favorites, Meighan would be at the top of my list.
Now do yourself a favor and go visit Heavens to Meighan.
Or follow her on twitter.
She also has the funniest Facebook cover photo in history. Check it out.