FANTASY FOOTBALL. So I emailed Sarah like ohhhmyyyeegawd I have the best idea. And she was like duh, four other people had the exact same idea and all had emailed her because she is our main squeeze for everything sports related.
So if you spent all of last football season feeling excluded from household activities while secretly wishing you could become Jenny MacArthur, TODAY IS YOUR DAY. 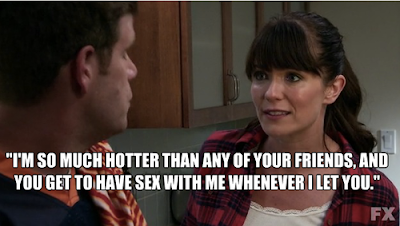 Choose your team wisely coughChooseMinecough.
And as for the rest of you… 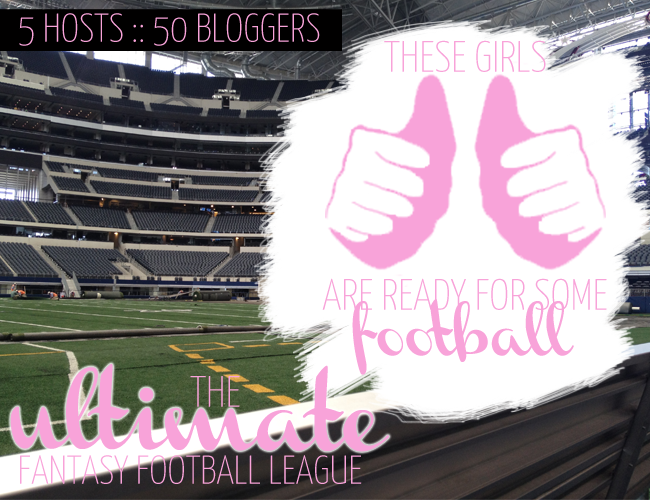 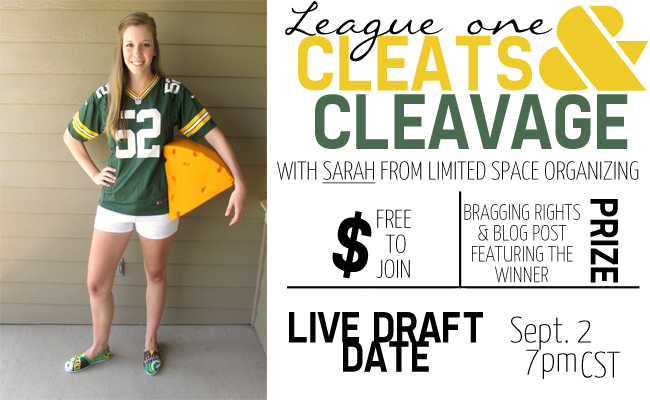 League Name: Cleats and Cleavage
Cost to Join? Nope!
Winner’s Prize: A blog post featuring the the winner and bragging rights
Dirty League? Of course
Draft Date: Sept. 2, 2013 7pm CST
Why should you choose my league? Real football fans ONLY! If you’re looking for fun, football, and maybe a little smack talk, then look no further! This will be a fun-loving league full of big-time fans of football, but a little trash talk never hurt anybody. 😉
Michael // Crazy Tragic Almost Magic 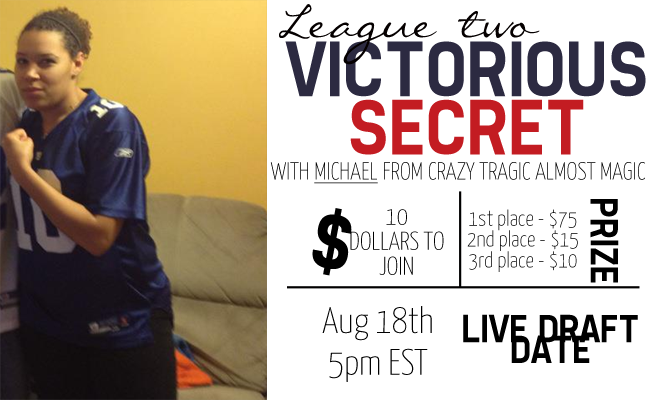 League Name: Victorious Secret
Buy in: $10
1st place – $75
2nd place – $15
3rd place – $10
You’re probably wondering why you should join Victorious Secret instead of the other 3 leagues, right? Well, I’ll have you know I’ve been around the commissioner block, so I know what I’m doing. I want to see the smack talk, dirty team names and boasting when your team wins for the week. Nothing is off limits. Get crazy, get signed up and let’s play some “fooseball”!

Karoline // Karoline with a K 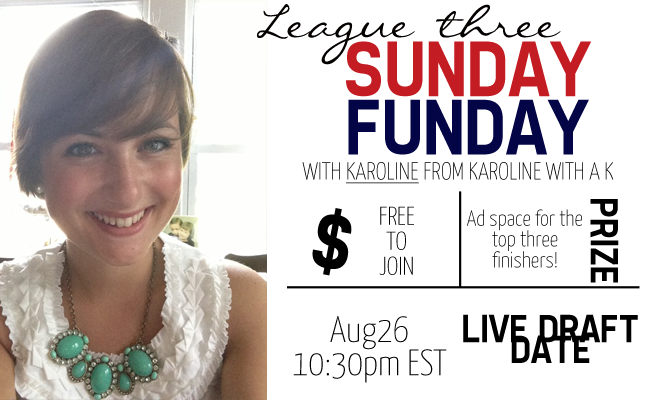 About the league: I’m a sportswriter, so I’m looking to have people who really enjoy sports to join my league. Huge bonus if you want to name your team something dirty or funny (I’m still working on my name…). Smack talk is also absolutely encouraged in the message boards! ALSO I don’t normally do Saturday posts, so every week on Saturday I am going to be doing a feature spot about the league. For week 1, I will do a writeup about the league and it’s members and for weeks 2-13 I will invite each member to guest post about their team and their thoughts on and experience with the league so far (AKA free publicity for you and your blog!)
League type: no entry fee, but there will be prizes in the form of ad space for the top three finishers!
Rules: My only rule is that people set their lineups! It’s my biggest pet peeve when team owners don’t check their lineups and leave injured/inactive/bye-week players on their team any given Sunday!! 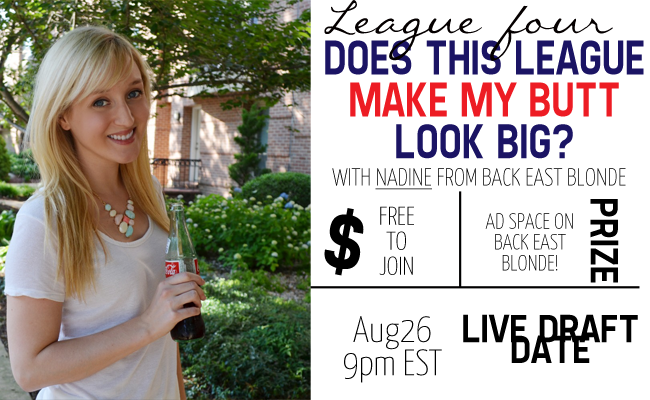 League Name: Does This League Make My Butt Look Big?
Cost of Joining League: fo free
Winner receives: Lots of good ju-ju and a free medium ad space on Back East Blonde (and maybe the other team members blogs, if they want to pony up)
League description: For years I’ve sat on the sidelines, admiring my man friend’s fantasy football team and occasionally being his Jenny behind the scenes (if you didn’t get that League reference, reevaluate your life). But alas, the time has come for me to step out of his fantasy football shadow. I’ve got FOMO like a MOFO and if you do to, this league is for you.
League members are strongly encouraged to draft players based on the following criteria: talent, looks, and warm fuzzies. Expect Tom Brady to go in the first round (duh…pause while I drool), Arian Foster to get lots of awwws (did you know he went vegan? precious), and Michael Vick will not be available to be drafted. Because if there’s one thing bloggers love, it’s puppies. Silly smack talk is always encouraged and wildly inappropriate team names are a must. Now let’s have some fun, shall we? 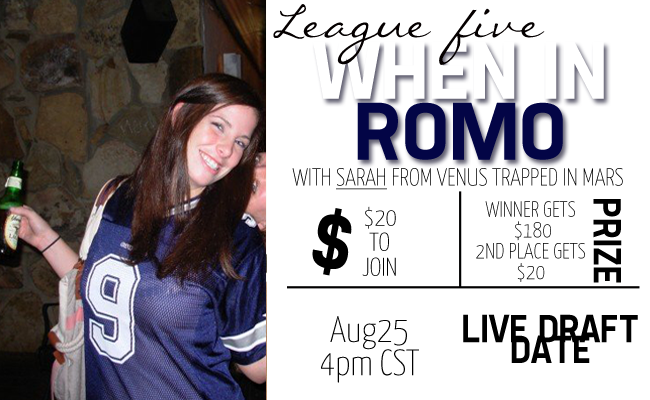 Team Name: When in Romo, Do As the Bloggers Do
Cost of Joining League: 20 hard earned dollars
Winner Receives: $180, 2nd place gets their money back.
Draft Date: Aug 25 4pm CST
About the League: This ain’t your grandmother’s league. But only because mine is actually already signed up to play in my mom’s league. That wasn’t a joke. Rules are there are no rules. I don’t give a flip if you ever update your roster, talk smack or are even available for the live draft. In fact, better just give me your money now, save us all some time. I’m just looking around to see who is going to finish second. Get your popcorn ready, cause I’m gonna put on a show.

The 15 Most Sob-Worthy Celebrity Breakups
8 Perfect Books for Your Summer Reading List
6 Songs I Never Get Sick Of
The 12 Funniest F.R.I.E.N.D.S. Moments