With all this Miley stuff floating about the interwebs, for a second I thought it would get up on my high horse.

I watched the performance. I felt weirdly amused, violated, and shocked, but I definitely couldn’t look away. My very first thoughts were:

So as Miley was grinding on many a teddy bear I just kept thinking….doesn’t she realize?

And then I thought this: What if all of my bad choices were publicly broadcast for the world to see? What if there had been videos of me doing anything that I did in college on a Friday or Saturday night? That’s not to say I did terrible terrible things but I can guarantee you I did a few things that would make my mother cringe. And she’s pretty chill about my shenanigans.

Way before we had the buzz cut Miley, we had Disney Miley who had video released of her smoking something she said was legal Salvia. We all know it wasn’t and anyone has ever done it knows exactly what it was. We knew there was a chance that this Miley was coming. She made that even more obvious with her “Can’t Be Tamed” video. She’s young, she’s experimenting. Isn’t that what I did too?

If anything I think this is solid proof that the human brain is not fully developed until age 25. That’s science right there, not speculation.

I’m not saying don’t judge Miley, because she put it out there for us to absolutely judge, but I am saying really think about what it would be like if everything you did was on video and consider your life choices at her age. I got my belly button pierced (because my Mom always said I wasn’t allowed), had platinum blonde hair, went to tanning beds regularly, spent every Friday and Saturday night in frat houses drinking ungodly amounts of jungle juice, and spent plenty of time taking advantage of all that California has to offer.

And in honor of Miley’s not fully developed brain, here’s a gem from mine: Does this picture say: future non-profit worker, level-headed adult, stable girlfriend, dog mama, drinker of just two glasses of wine a week, and girl who loves hanging out with her parents? Nope. But she’ll turn into that girl.

So I’m trying my best not to judge Miley. I like her songs and frankly someone might be a little embarrassed that they googled “how to twerk”. Although now that I think about it, her performance was pretty much a tutorial.

Today I’m excited to introduce you to Bri from Back to Bliss. 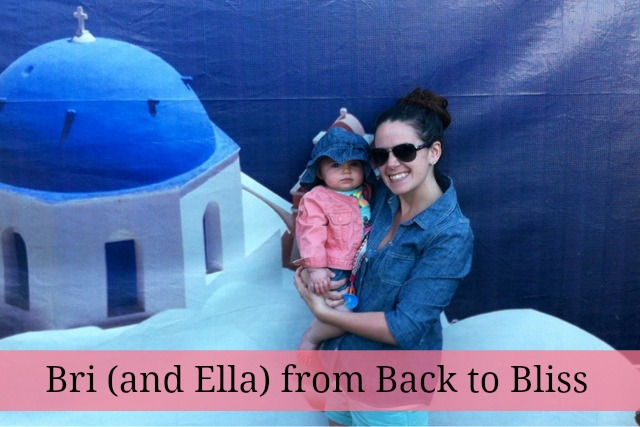 Bri is a Mama to Miss Ella, a teacher, and a fashionista. Her recent post about Fall Fashion Must Haves was exactly what I needed to become obsessed with the idea of a tortoise shell watch. Do you have little ones of your own? I bet you could use this post about road tripping with a 1 year-old. She also proved that she’s the teacher I wish I’d had in school. She has a classroom twitter and instagram! Talk about relating to the students on their level. I love it.

Bri is also a runner and wrote a fabulous guest post on my blog called How to Get Into Running if you Hate Running. To date it is one of my most read posts and it’s a must read if you hate running too! Now head on over and visit Bri or follow her on Bloglovin.