Dating in the workplace.
It’s not romantic. It won’t make a good story.
But damn it, it’s convenient and a ton of fun.
I’ve mentioned it before that Naveed and I met at work.
Now I’m not saying it will always turn out great.
(I think I got pretty lucky)
It could get awkward. And it could get awkward real fast.
But here are some definite upsides you might want to think over… 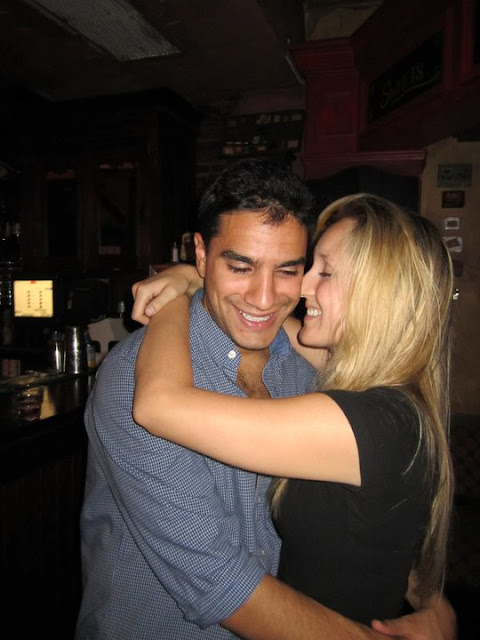 1.  He’s already background checked! Yup, HR did all the digging for you. Score! He’s felony free.

2. It makes going to work exponentially more fun. You know those butterflies in your stomach when you get a text from him? Yup, you have those all day long. Especially if you can catch a glimpse of him occasionally from your cubicle.

3. Secrets don’t make friends, but they make great lovers. That smirk on your face? Your cubicle mates have No. Freakin. Clue. Sneaking around with someone you are legitimately dating can be a ton of fun.

4. When you act ridiculous on weekends (i.e. making out in bars, dancing inappropriately, see above), it gives you something to giggle about over office communicator on Monday.

5. In their twenties, people are changing jobs constantly. If it doesn’t work out, there’s a really good chance neither of you are lifers at the company. One of you will be gone in a year or two. Only a year or two of awkwardness (somehow, that was supposed to make you feel better) might be worth the risk to find the guy.

6. Other people are doing it! Look around your office. Is there a guy/girl pair that eats lunch together just a little too often? You won’t be the first ones doing it. I promise.

7. Think about it really hard. You know a great couple who met at work. You do. Both of my parents met their spouses at work. It’s not unheard of and hey, it’s gotta work out for someone.

Why can’t that someone be you?
Nav and I started dating unofficially around March, officially in June of 2011.
He left the company 6 months after we started dating; I left after almost a year.
We kept it quiet, for the sake of professionalism.
And somehow, we never ran into people from work outside the office.
Our close work friends knew, but that was it.
It’s a weird way to start a relationship but hey, it worked out!
*I feel like this is a given but check your HR policy first. Our company didn’t prohibit dating but some do. Unless you know FOR SURE that a guy you work with is THE GUY, it’s probably not worth getting fired over.

Why Marriage Isn't the Biggest Commitment